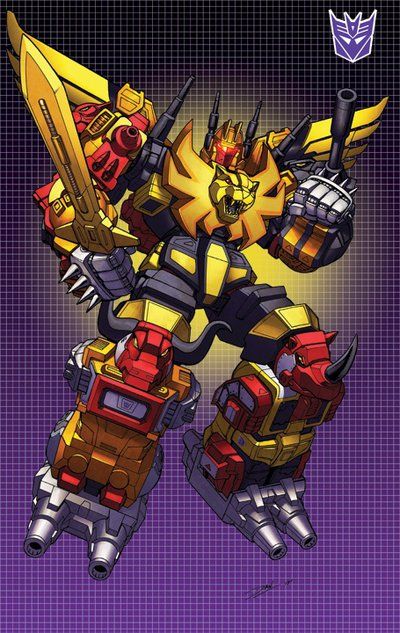 Profile: Although he's a living machine whose thoughts are dictated by a mass of microprocessors and logic centers, all of Predaking's actions seemingly result from swift, savage, animal instinct. The five Predacons -- Razorclaw, Rampage, Tantrum, Divebomb and Headstrong -- who comprise Predaking blend together so smoothly, their circuits integrate so seamlessly, that Predaking moves wilh a fierce fluidity that belies his multi-body construction. He doesn't think, he only reacts. Whether his optical sensors detect the movement of a jumbo jet or an ant, his response is the same, virtually instantaneous and usually deadly. Only other Decepticons can escape being targeted by this hair-trigger horror, and even they worry that in some instance Predaking might mistake them for the enemy. But despite the ever-present danger he represents, the Decepticons value Predaking's abilities. As a warrior he has no equal; as a weapon he has no restraints. He is the closest thing to a perfect fighting machine the Decepticons have.

Abilities: Predaking is monstrously strong. He can lift 500 tons without straining a circuit. He reacts to any movement he sees within .002 seconds. He can generate a powertul electric field about himseft that dampens or repells any energy-based beams and prevents other Transformers from approaching any closer than 10 teet. One punch trom his fist can shatter a 9-foot reinforced concrete cube. He wields a powertul X-ray laser cannon, whose blast has the equivalent explosive force of 100 tons ot TNT. Each of his feet has a double-barrelled mortar shell launcher within it.

Weaknesses: Predaking has no known weaknesses.

Personal Notes: 1. Predaking is the first Predacon gestalt and is composed of the original Predacons. Theirs and the Decepticons' descendants include Megatron II, Tarantulas, Dinobot, Terrorsaur, and Tripredicus. 2. Unlike the Predacons of 2306, the classic "Preds" mimic mammals and bird(s).

Back to the Metroplex.
Back to the Decepticon Page.
To the Memphis Page.
Yahoo!, A decent search engine.